The river originates in the central part of Tanba Mountain range, then, it flows around through the mountains from Sonobe to Kameoka City. Then, it runs into the Hozu-kyo Ravine and reaches world famous Arashiyama. It then merges to Kamo-gawa River, and to Yodo-gawa River. The river from Kameoka to Saga-Arashiyama, Ukyo-ku, Kyoto City, is called the Hozu-gawa River, famous for its beautiful ravine and boat ride.

The expression “Kawakudari,” a boat ride down the river, was started to be used when the history of using the Hozu-gawa River for transport began. It is a water transport whose history started when the capital was in Nagaokakyo City, even before there was a capital in Kyoto City. To help build the new capital lots of logs from Tanba, bound together into rafts, were transported down the Hozu-gawa River to Kyoto. Later the Tanba logs were in great demand and sent down the river by for the construction of Tenryu-ji Temple, Rinsen-ji Temple, Osaka Castle, and Fushimi Castle,

Not only logs, but also rice, wheat, firewood, and charcoal were transported after Ryoi Suminokura, a wealthy merchant called the “River Lord” in Kyoto, opened the ravine up for boat transports in 1606.

Transporting abundant and high quality of timber, grain, and firewood and charcoal was a thriving business but this vital role the river played was overtaken by rail transport with the opening of the current JR Sanin line in 1895, and later by road transport, such as trucks. From around 1945 rafting logs downriver stopped.

Not only is the scenery beautiful year-round, but the Hozugawa Ravine holds many unique points of interest, including; colossal boulders, glimpses of the surrounding mountains, mysterious deep pools, wildlife, charming flowers and trees, and intriguing geologic formations.

The Ravine is and was so popular with tourist that in 1895 the sightseeing riverboat ride was introduced. Nowadays since the river no longer carries rafts or cargo the Hozu-gawa River is exclusively used for sightseeing.

The Hozugawa River Boat Ride is a world famous sightseeing experience whose travel distance is 16 kilometers-long, traveling from Kameoka to Arashiyama. About 300,000 tourists visiting us throughout year enjoy the beauty of nature in each season and thrill of the river ride.

When Ryoi was 51, he decided to launch his long-cherished plan – to excavate Hozu-gawa River for the waterway from Tanba to transport abundant goods to Kyoto. In Keicho 11, 1606, he started out on the development of the Hozu-gawa River water route, where there were lots of difficult and dangerous parts to open in the mountains – many huge rocks blocking the water route and rapids. And the major waterway connection between Tanba and Kyoto had been completed at the cost of many lives and an enormous amount of money.

Not only did he open the waterway of Hozu-gawa River, but also opened Takase-gawa Canal to connect Kyoto and Osaka, and opened waterways of Tenryu-gawa River and Fuji-gawa River.

When the boat reaches Saga-Arashiyama, close to the landing point of the ride, you can see Daihikaku Senko-ji Temple. This temple was built by Ryoi to mourn for the heavy toll of lives during the excavation of Hozugawa River. There is a monument of Ryoi, too. 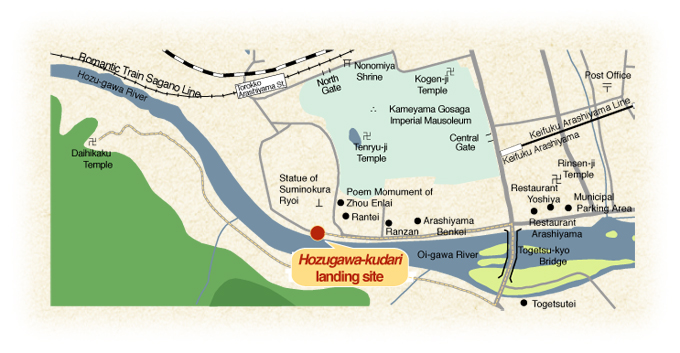 In 1991, a great writer by the name of Soseki Natsume published his book,”Gubijinso”. In his story, he describes the various scenes along the Hozu-gawa River such as the beautiful rock formations and the incredible skills of the boatmen.

The story begins at Saga station on a train. This particular train carries its passengers to Kyoto, and then to Nijyo station. From there, one must board a separate train in order to go through the tunnels en route to Tanba.

In Natsume’s story, a young couple buys their tickets for Tanba, getting off at Kameoka. This train is most likely the location of the famous Hozugawa-kudari. The water of the Hozu-gawa River was so clear and the stream mild. Along the wide banks grew bamboo blossoms, which children often picked. There, the boatmen would wait for their guests.

Since then, the Hozugawa-kudari became quite popular among many people, especially during the Taisho Period (1912-1926) and the beginning of Showa (1926-1989). It was said to have been frequented by many foreign visitors who crossed Oino-saka from Kyoto City on a rickshaw powered by two men.

People often referred to this road as “IJIN KAIDOU”. This was the highway which led foreign travelers to their boarding places after the cruise on Yamamoto Beach.

It is believed that Kyukin Susukida, a famous Meiji poet, consecrated his first collection of poems, “the Departing Spring” to the Water God by binding them with a Koto string and attaching a stone, sinking it into the abyss of the Hozu-gawa River.

The Hozu-gawa River has also been described by many other famous writers such as Keigetsu Oomachi (Meiji Period), ‘Golden Pavilion Flamed’ written by Tsutomu Minakami, ‘Kansai Literature Stroll’ by Utaro Noda, and ‘Sasayama Highway Records’ by Masuji Ibuse. The latter three are modern writers.

Enjoyed by people all over the world

When the Prince of Romania in 1920 and Prince of Wales in 1922 visited Japan as guests of the nation, they experienced boat rides and praised its scenic ravine and thrilling journey highly. So in 1929, the Duke of Gloucester and other Royal Families invited as guests of the nation rode boats down the river. After World War II, Princess Alexandra, Randolph, the British Ambassador, Princess Margaret and Lord Snowdon enjoyed our boat rides.

Speaking of domestic guests, Hisamoto Hijikata, the Minister of the Imperial Household, in 1915, Showa Emperor and Princess Chichibu in 1926, Princess Hitachi and other members of Royal Family in 1983 tried the boat rides. Not only did they enjoy the beauty of the ravine and the thrill, but also were amazed by the boatmen’s techniques in pole handling. Hozugawa-kudari has been loved and enjoyed by people all over the world.